By mixing textures, lighting effects, and line work, Apollo visually evokes the familiarity of a guitar amp with flat design to create a truly unique experience.

The initial screen resembles a guitar amp. It uses familiar imagery of the hard leather exterior and metal finishes to ground the user in a familiar place while the orange and blue lighting effects give a hint of the ethereal sound scapes to come.

From here, the user is encouraged to explore presets and adjust the sound of the guitar with the amp controls above and the effect pallet below. 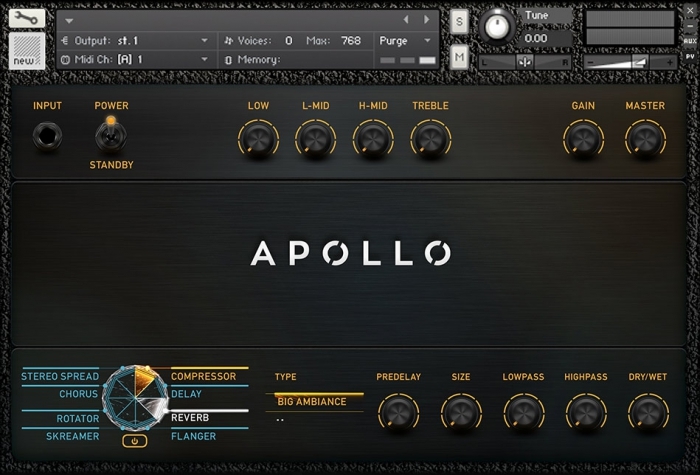 This is where Apollo takes you on a journey through a black hole and back. Each sound can generate 2 synth pads. Moaning swells, fast pulses, and sustained frequency are brought into the composer's hands. They glow with intensity as the levels increase. 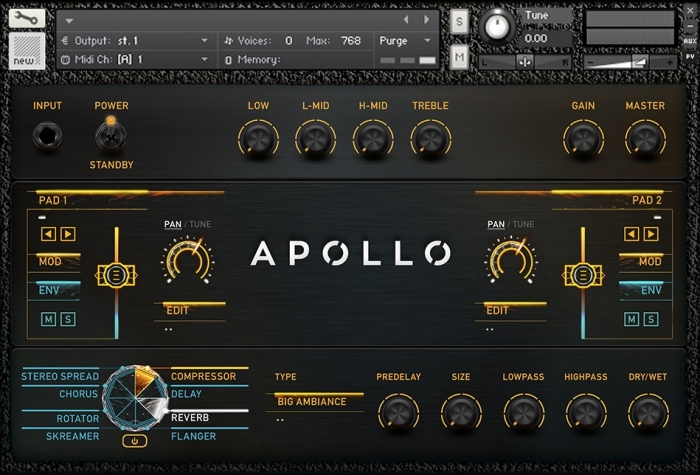 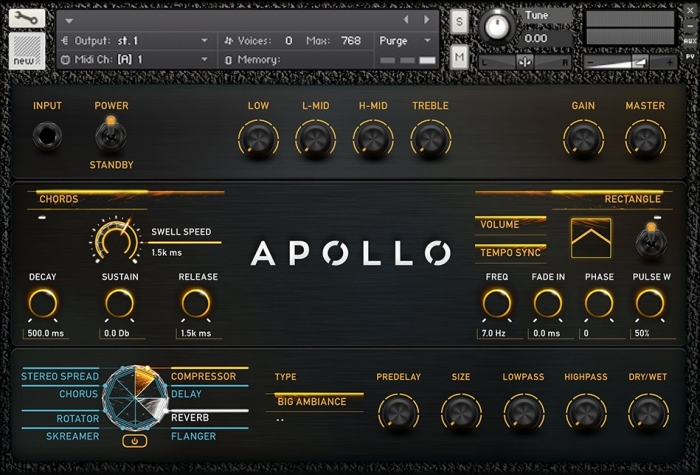 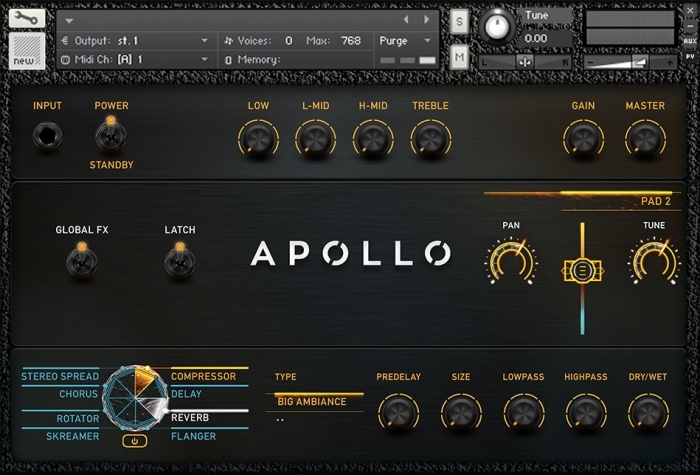 This screen is meant to act as a sort of mission control for the mix. The Apollo sound engine can have up to 12 channels of sounds active at once. With all of those layers piling up, modifying the pan, and volume levels are essential to polishing the final performance.

Reversing the sound be accessed on this panel in addition to the effect palette to bring the performance to new depths and produce other worldly sounds. 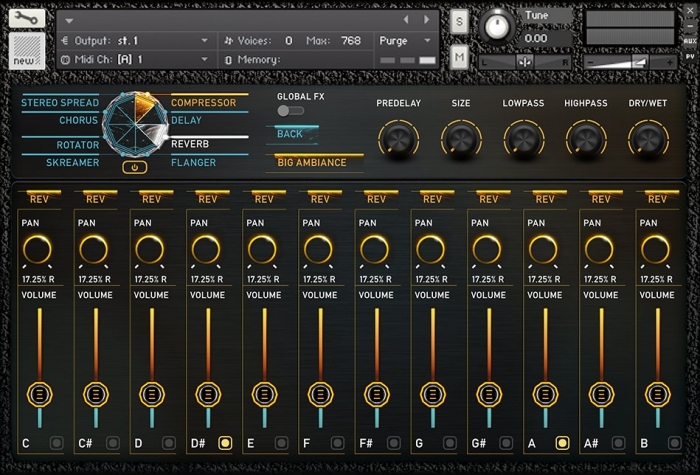 This is a revolutionary new approach to guitar-based ambient sound design. Each color group represents a group of keys on the keyboard, too high or low to produce a sound, that can trigger which ambient noise is played with the rest of the guitar performance. The dramatic crescendos and reflective emptiness gain a new level of intimacy with the ability to design an environment, not just a guitar riff.

The mastering and compression tools alow the subtle peaks of the designed ambient environment to delight the senses and stand firmly with the rest of the mix. 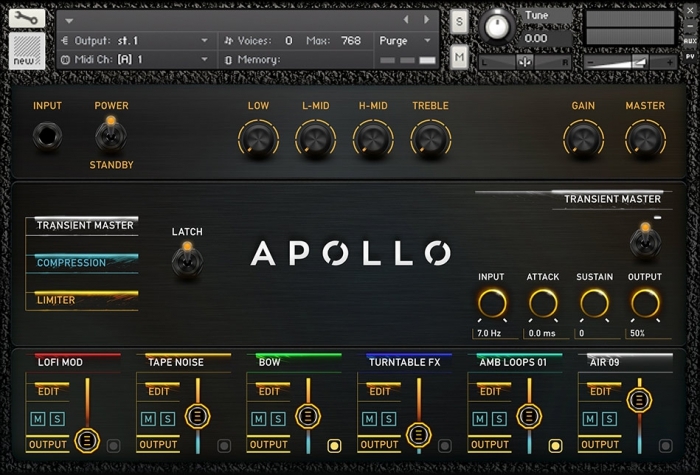 "5/5! You can muster some beautiful conventional guitar sounds from it, but it also impresses as a tool for sound design. Very cinematic, very guitar, very good."
Sound On Sound Magazine

"8/10! This is a great tool for anyone working with scores who wants to bring a new level of atmosphere to their productions."
Music Tech Magazine

"5/5! Apollo is a beautifully recorded, easy to use library with loads of MIDI controller points that may leave my guitar amp collecting dust in the corner."
Sample Library Review

"4.5/5! The first thing I noticed about this library is how real it sounded, not that other libraries sound fake, but each sound retains the feel and character of a real guitar."
Sounds And Gear

"Apollo is significantly different from other guitar libraries and one that’s well worth exploring."
AudioFanzine

"The library will be a great addition to my palette of sounds for giving tracks some nice background glue."
The Audio Spotlight

Another illustration for the e-commerce graphics that was not used in the final release. The picture features two planets colliding together surrounded by brilliant bursts of colours and energy. 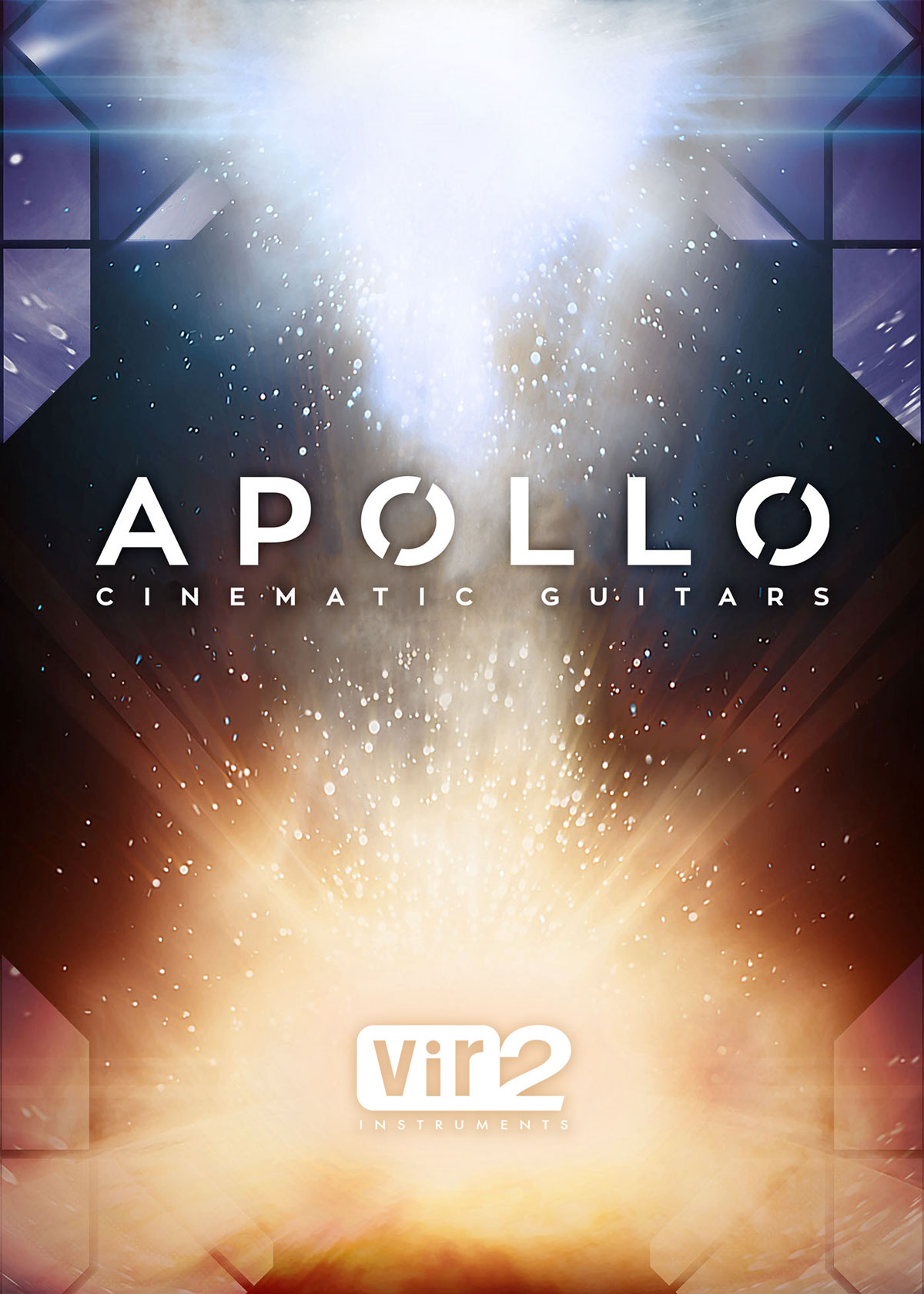 KORG iWaveStation is an authentic reproduction of the original 90s device that was used by artists such as Michael Jackson, Phil Collins, and Depeche Mode. The WaveStation was the first to feature an advanced vector synthesis system that created new sounds by combining multiple waveforms. To this day it's still considered a legendary and unique instrument. This project was a dream come true. With KORG being the leading brand in music technology, it's the equivalent of being asked to reimagine the original Porsche 911 for the 21st century.